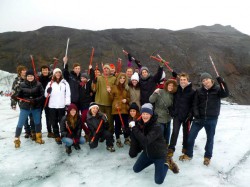 On March 22nd, Ms. O’Brien accompanied by Herr Klein took the 1ère Geography class to Iceland for four days. Upon our arrival we visited the geothermal spa, The Blue Lagoon, one of Iceland’s many attractions which is known for its therapeutic purposes. The next day we continued our adventure by exploring lava caves where in some parts, there was 15-18 meters of cooled lava overhead.

We visited Europe’s most impressive waterfall, Gullfoss, during our Golden Circle tour. That night we went hunting for the Northern Lights also known as Aurora Borealis which was found to be unsuccessful. However, we saw the faint beginning of the northern lights as a milky complexion to the sky. We later trekked over one of the worlds most accessible glaciers and were led by Bear Grylls’ former guide whilst filming “Man vs Wild” years earlier. Following this we embarked on another drive to visit a crater lake which is known as the location Björk, the world famous Icelandic singer, once had a concert.

We were also able to visit a geothermal power station as Iceland is well known for their production and use of renewable energy. Lastly, we were able to visit þingvellir, which is a site of a rift valley called the mid-Atlantic ridge separating at a rate of 2.5cm per year. On one of the days, we had free time to discover Reykjavik. While others looked around in local Icelandic shops some indulged in the traditional puffin or whale burgers.