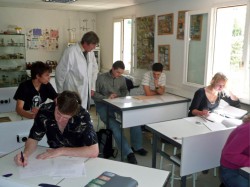 Cambridge IGCSE is the world’s most popular international qualification for 14 to 16 year olds. It is recognised by leading universities and employers worldwide, and is an international passport to progression and success.

Schools worldwide have been involved in the development of Cambridge IGCSE. The syllabuses are international in outlook, but retain a local relevance. They have been created specifically for an international student body and avoid cultural bias.

Make your choice
We use cookies to ensure that we give you the best experience on our website. If you continue to use this site we will assume that you are happy with it.Ok