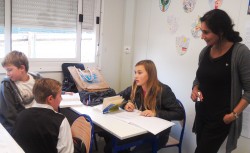 G’day! I’m Yasmin from Sydney, Australia and have been living in La Rochelle for a few years now. I was at IBS for 3 months this year to complete a student teaching practicum towards my double degree of Arts and Teaching from the University of New England in Australia.

IBS is unique, as it was the only International school in France that welcomed and supported my student teaching experience. I received invaluable knowledge and experience from the teachers and students I worked with. While at IBS, everyone in all departments were encouraging and helpful towards having a positive and enjoyable experience.

Thank you IBS for the wonderful opportunity not only for my degree but also in allowing the uniqueness of IBS to reflect in my future teaching.

After completing the International Baccalaureate at IBS in the spring of 2011, I began my college tenure at Williams College in Williamstown, Massachusetts, near the Northeastern Coast of the United States. After a strong foundation in Chemistry at IBS, I majored in Chemistry and will be graduating with a Bachelor’s Degree with honors in Chemistry from Williams in June of 2015. During my four years at Williams I had the opportunity to spend two summers in Chemistry research labs at Williams and I also spent a summer on a research fellowship at Stanford University.

This fall I will begin pursuing my Ph.D. in Materials Science and Engineering. I have been accepted to several universities and am in the process of deciding which program will best suit my research interests.

Living in France and attending IBS fuelled my desire to travel and I spent the fall of 2013 on a semester abroad, living and travelling in Morocco. During this time overseas, I visited a village that had no running water and very limited electricity. I witnessed first hand the hardship that people face in places with restricted access to energy. After returning to the States, I decided that I would pursue a career researching renewable energy technologies that might make energy more accessible and improve the standards of living for people in developing nations.

I credit Mr. Tricker’s chemistry classes with first sparking my interest for this discipline. The firm foundation I received in his courses put me on a trajectory for a career that will be both lucrative and rewarding. 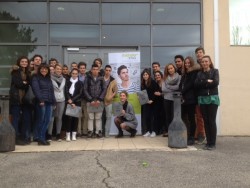 On the 17th of March, all of the students in the 1ère Bilingual Section, accompanied by Mme Salazzini and Mr Toppia, visited the campus of ESG, a business school in Aix. Students were able to listen to a presentation of the school, discuss with current students, and learn more about various higher education options. An informative afternooon for our students…and a big thank you to ESG and in particular, Mme Abdelali.

The week of January 26th, a group of 108 IBS students in 6th, 7th, 8th and 9th grade took to the French Alps ski slopes for a week of studies, visits and of course, hours of fresh powder skiing. The group stayed in the Lauzetane Hotel in Praloup who have graciously hosted our school for the past sixteen years and are now part of the IBS family.

We would like to thank the students for their excellent behaviour and group spirit, the teachers for taking care of the students (on the slopes and off!), our professional IBS photographer Ms Weingaertner, the ESF ski team, and the Lauzetane team for hosting us every year.